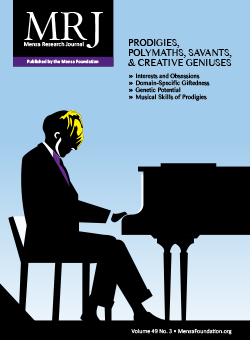 The topic of the fall Mensa Research Journal is “Prodigies, Polymaths, Savants, and Creative Geniuses.”

I had intended it to be about the nature of genius. I was referring to the domain-specific type of exceptional genius found in musicians such as Mozart, Beethoven, or Brahms, or more recently Gershwin, Copland, Rodgers, or Bernstein; scientists such as Newton, Tesla, Einstein, or Hawking; and polymaths who excelled in many domains such as Da Vinci, Galileo, or Franklin. Excuse me if your favorite genius isn’t listed — there are so many.

The problem is that, although there has been much written on the subject, there is not much current research, and this journal always publishes current research. If you want to read an excellent address on the intended subject, see: Jones, E. (1956). The nature of genius. British Medical Journal, 2(4987), 257.

Fortunately, not all exceptional geniuses are dead. There are some notable prodigies around who are bound to leave their mark on this world. One of these, Alma Deutcher, from Basingstoke, England, was recently profiled on CBS’ 60 Minutes. She composed a piano sonata at age 6, a violin concerto at age 9, and her first full-length opera, Cinderella, at age 10. The opera premiered in Vienna with Zubin Mehta conducting and was produced in California by Opera San Jose. She was able to name the notes on the piano at age 2 and says that melodies continually flow through her head and arrive fully formed. Of course, she is a virtuoso on the piano and violin and even sings well.

The really remarkable thing about Alma is that she isn’t all that remarkable. If you search Google for prodigies she doesn’t even come up in the top 10. There’s Autumn de Forest, who began her art career at the age of 5. She has since built an impressive body of work that is in many major art collections. Akrit Jaswal was only 7 when he first led a surgery. At the age of 12 he is working on a cure for cancer. Ryan Wang started playing piano at the age of 4. He has since played at Carnegie Hall and in concert halls throughout the world.

Although most of these prodigies have IQs that are extremely high, nearly unmeasurable, some prodigies in specific domains would not even qualify for Mensa. Many do not continue their activities into adulthood or have problems when they grow up.

Finally, I sincerely regret reporting the death of MRJ Executive Advisory Board member Dr. Michael Jacobson. He was very active in all levels of Mensa, a trustee and president of the Foundation board for many years. Mike was a friend; we served together on the AMC when he was Director of Science and Education. He will be sorely missed.