Unraveling the Mysteries of Sleep

“Happiness consists of getting enough sleep. Just that, nothing more.” —Robert A. Heinlein

“The amount of sleep required by the average person is five minutes more.” —Wilson Mizener 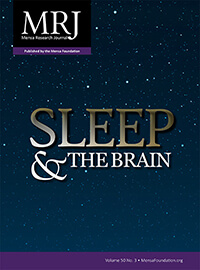 From Plato to present time, authors, actors, and activists, or anyone with an opinion … quotes on sleep abound. In general, many of us spend about one-third of our life sleeping. Whether you are an insomniac or a napper, sleep is a universal aspect for all of us.

In the latest issue of the Mensa Research Journal, we attempt to unravel the mysteries of sleep and its effect on the brain through the work of a selection of researchers. Our first article explores how sleep deprivation affects attention and cognitive control, in particular top-down processing (e.g., requiring sustained attention) relative to bottom-up or more automatic processing.

Although not a research article, I chose the second article because of its proposed framework of how sleep spindles and their characteristics play a role in memory reprocessing and consolidation. Although asking questions rather than presenting answers, it provides a bit of overview that segues to the research articles on sleep spindles that follow.

Sleep spindles occur during non-rapid eye movement (NREM) sleep, and are usually described as a series of neural oscillations. Their significance related to various brain functions provides fodder for a variety of research. How do they affect cognitive ability or memory consolidation (short- and long-term)? What changes, if any, occur from adolescence to adulthood? This issue includes a collection of research articles that seek to find answers to these questions.

My favorite articles, with a topic of napping, are the last two in this issue. Turns out that napping for older adults benefits working memory. I also learned there is a difference in nap outcomes between those people who regularly nap and those who don’t. And, I’m happy to have research evidence to justify my naps. Check them out for more information.

In closing, I want to say thank you to Steve Slepner. He did a fine job selecting themes and articles to bring the latest information about intelligence to the MRJ’s intelligent readers. The Foundation thanks him and appreciates his service as MRJ editor.