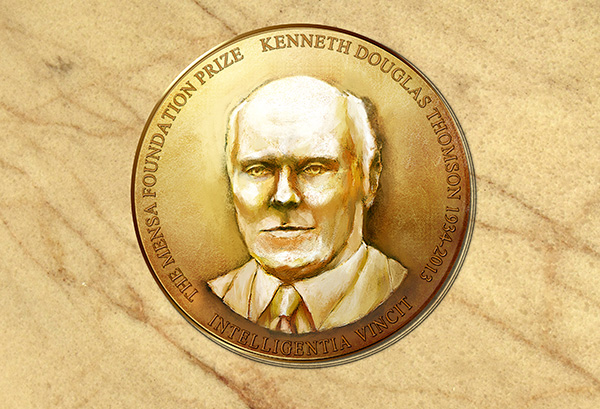 The Mensa Foundation Prize is awarded biennially for the best scientific discovery in the field of intelligence or creativity. Endowed by the estate of Kenneth Douglas Thomson (1934-2013), the award includes a $10,000 prize, personal plaque and medal.

Kenneth Douglas Thomson was an industrious, frugal and enterprising individual. For nearly 50 years, he was a member of Mensa and valued the organization as much as he valued intelligence and learning. Kenneth was self-taught in a number of fields, among them carpentry, cabinetmaking, electronics, auto mechanics and cooking. He used some of that knowledge — and vast stores of creativity — to build on the East and West Coasts several homes that included his stunning handmade kitchen cabinets in mosaics of tropical hardwoods.

Traumatized by abuse in his youth, Kenneth was reclusive in adulthood. He chose to direct the fortune he had accumulated to several organizations. One component of his estate will be used to prevent child abuse. Another generous bequest will help the Mensa Education & Research Foundation, where it will be used to create the Mensa Foundation Prize. We join him in his fervent hope that this prize, to be awarded every other year in recognition of the best scientific discovery in the field of intelligence and/or creativity, will inspire scientists to explore the fields that mattered so deeply to Kenneth.