She Changed My Life; She Saved My Life

The following was written by Mensan Jessica Street in support of Karyl Kubick Hanson’s nomination for the Mensa Foundation Distinguished Teacher Award, recognizing a teacher for positive influence on the education or life of a Mensa member. It is reprinted with permission upon the announcement of Hanson receiving the 2018 accolade.

It’s March of my freshman year in high school, year 2000. I have failed my classes because I wasn’t in them. They want to hold me back — or expel me. This particular beautiful spring day I am being put in handcuffs for a crime that I probably shouldn’t mention. That, along with a sad excuse for a suicide attempt, gets me locked up for almost a year.

It was when I got out that I met her, the teacher at the school that was my last option, an “alternative school.” That’s the more socially acceptable name for the school where they stick the “bad kids,” the ones who have been generally given up on by the mainstream public schools. I walked into that school with only the expectation of being looked at like a failure, like I had for years before. This was the ’90s in rural Wisconsin. We didn’t have gifted classes. I ended up one of the bad kids.

She saw potential in me that I wouldn’t even begin to see for the greater part of the next two decades. She gave me the structure that I needed to succeed.

I realized early on that this beautiful woman had a shell much tougher than my own, a first for me in my school career. There was no hiding things; she saw everything. And she was tough as nails. In this class of misfits, the bad kids, the teenage addicts, the dropouts, most teachers would break. Most wouldn’t last a month with us. It is a thankless job. The percentage of students who end up in one of those aforementioned categories is greater than the percentage of ones who graduate and far greater than the number who by some miracle make it through college.

She saw potential in me that I wouldn’t even begin to see for the greater part of the next two decades. It was enough for her to push me to be everything I never even knew I was capable of. She gave me the structure that I needed to succeed. She built me up with the qualities that had always been missed before, and she overlooked my flaws. She never put up with any bull, and you know how good high schoolers are at that.

She helped make it possible for me to not only finish high school without being held back a grade but graduate a full eight months early. She even set opportunities in motion for me to become a better person, such as tutoring children with autism, having my poetry published, and being nominated for Who’s Who in America’s High School Students. She was my biggest cheerleader, and she continues to be even now.

Fast-forward almost 19 years, to today: I am an award-winning college graduate, with honors, and a registered nurse on an oncology unit. I have a beautiful daughter, who just happens to also be a young Mensan. I know beyond the shadow of a doubt I would not be here if not for my teacher. Not just where I am now, but I might not even here at all. If anyone I have ever met deserves this award, it is she. 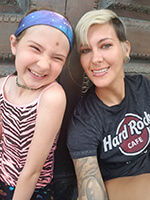 Jessica (right) is a pediatric hospice nurse, an award-winning artist, and full-time student. Originally from Wisconsin, she currently resides in central Florida with her 9-year-old daughter, Athena, and a house full of rescued special needs pets. Jessica’s passions are global missions nursing and speaking out to try to end our society’s taboo on death and dying.
Central Florida Mensa | Joined 2015