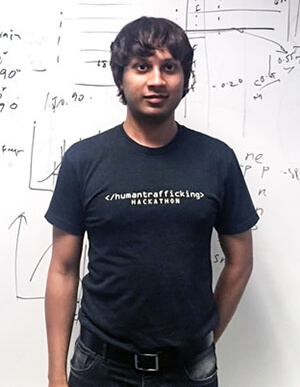 For only the second time, the accomplishments of a single nominee have earned that Mensan two Mensa Foundation awards. Mayank Kejriwal, who also is the recipient of the 2019 Intellectual Benefits to Society Award, conducts research at the Center on Knowledge Graphs at the University of Southern California’s Information Sciences Institute, with a focus on developing high-impact artificial intelligence technology.

“I am a passionate advocate of using AI for social good and for ensuring that the fruits of technological development are distributed to all,” said Dr. Kejriwal, who is being honored for his work combating human trafficking.

The International Labor Organization estimates 4.8 million people are trapped in forced sexual exploitation globally. Dr. Kejriwal, who has degrees from the London School of Economics and Political Science and the University of Texas at Austin, and is pursuing an MBA from USC, helped develop an AI system — Domain-specific Insight Graphs (DIG) — that has been deployed to more than 200 U.S. law enforcement agencies.

DIG is essentially a search engine that finds and downloads sex advertisements to a secure computer, “reads” the ads, and helps law enforcement explore leads with high accuracy. The impact has been significant. In New York, for example, evidence shows that prostitution arrests investigated for human trafficking activity have gone from less than 1 percent prior to implementation of DIG to more than 62 percent today, with the focus less on punishing victims and more on the endeavors of their “boyfriends.”

Dr. Kejriwal continues to use his AI expertise in other ways, such as resource mobilization during the Haiti earthquake and Hurricane Harvey as well as detecting fake news on the internet.