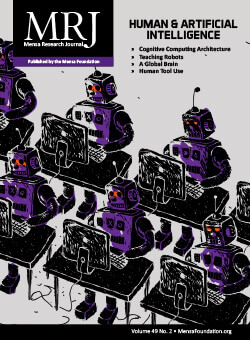 This seems very appropriate for Mensa, as so many of our members are involved in computers. It also fits in well with this year’s Colloquium theme: “The Evolution and Revolution of Manufacturing.” Manufacturing robots use a lot of AI; it is upcoming technology, very much in the news. I just read about a pizza-making robot whose pizzas were to be delivered by self-driving cars. There are also perils to AI. This issue looks at the development, uses, and dangers of AI.

“The Role of Cognitive Architectures…” by Antonio Lieto et al. starts off the issue by examining the models of cognition that are used to develop AI. “A Cognitive Architecture…” by Ryutaro Ichise continues this look at cognitive architecture and human intelligence factors in AI. “Metrics and Benchmarks in…” by Amir Aly, Sascha Griffiths, and Francesca Stramandinoli discusses developing cognitive robots that communicate with humans appropriately.

“Cognitive Computing and eScience…” by Thomas Marshall et al. examines the use of AI in human problem solving for an obesity intervention program. “The Human Behaviour-Change Project…” by Susan Michie et al. describes a project to build a knowledge system that will use AI to interpret findings from behavioral evaluations.

A favorite theme of science fiction is that the computers of the world connect and use their combined intelligence to take over the Earth. As it turns out, this might not be so far-fetched. Here are two papers that address this issue. “Using Stories to…” by Mark O. Riedl and Brent Harrison looks at how they might teach computers values that would inhibit them from performing things that would adversely affect humans. “Creatures of the Semiosphere…’ Cognitive Architecture of the Future Global Superintelligence” by Marta Lenartowicz addresses the issue of the “Global Brain,” distributed intelligence, and why we need to be wary.

“Looking for Intoolligence…’ ability to create tools and technologies to modify their environment. No, intoolligence is not a typo. It is a word that was coined to describe this ability.

While I was writing this, I heard of the passing of what was probably the world’s most intelligent person, Stephen Hawking. He was diagnosed with amyotrophic lateral sclerosis (ALS) at the age of 21. At 76, he survived at least 50 years longer than expected. He did not let this disability slow him down. He wrote 15 books, traveled to every continent, went up in a hot air balloon, and took a ride in a zero-gravity airplane. Toward the end he had control of only his cheek muscle and worked with Intel and Swiftkey to develop a computer and wheelchair that he could use to communicate and maneuver — using some of the technology described here. Ironically, he died on Albert Einstein’s birthday, which also happens to be Pi Day, March 14. Hawking claimed that he was born 300 years to the day after Isaac Newton died; actually, according to Google, it was Galileo who died on Jan. 8, 1642.

I won’t discuss his theories on black holes and gravity because, frankly, I don’t understand them.