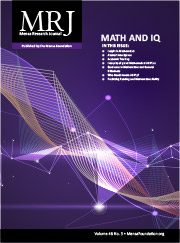 The topic of the fall 2017 Mensa Research Journal, “Math and IQ,” would seem to indicate that there is a direct correlation between these two subjects. As some of the research in this issue shows, this is not necessarily so. These papers also investigate the teaching of mathematics and its association with creativity.

The first article, “The Origin of Insight in Mathematics” by Reuben Hersh and Vera John-Steiner, looks at creativity and intuition in the research and teaching of mathematics.

The next article, “Abstract Intelligence: Embodying and Enabling Cognitive Systems by Mathematical Engineering” by Yingxu Wang et al., looks at the theory of abstract intelligence, which involves cognitive informatics and cognitive computing.

The third article, “Academic Tracking Is Related to Gains in Students’ Intelligence Over Four Years: Evidence From a Propensity Score Matching Study” by Karin Guill, Oliver Lüdtke, and Olaf Köller, looks at not only mathematics but also general cognitive ability differences in teaching using academic vs. non-academic tracks.

“The Interplay of g and Mathematical Abilities in Large-Scale Assessments Across Grades” by Steffani Saß, Nele Kampa, and Olaf Köller looks more directly at the topic of this issue, as its title states.

“The Interplay Between Excellence in School Mathematics and General Giftedness: Focusing on Mathematical Creativity” by Miriam Lev and Roza Leiken examines the complex relationship between knowledge, giftedness, and creativity.

“Who Needs Innate Ability to Succeed in Math and Literacy? Academic-Domain-Specific Theories of Intelligence About Peers Versus Adults” by Elizabeth A. Gunderson et al., investigates how believing intelligence is fixed, rather than malleable, affects later performance.

While this started out to be a review of the current research into mathematics and intelligence, it obviously expanded to encompass teaching, creativity, and general intelligence. I hope you find it informative.

The Mensa Research Journal, produced by the Mensa Foundation, highlights scholarly articles and recent research related to intelligence from a diverse selection of nationally and internationally esteemed authors. Learn more about the MRJ and subscribe today.